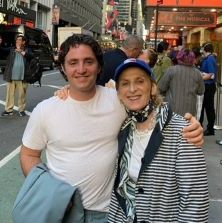 Why are you proud to be queer and Jewish (or proud to be a queer Jewish ally)? What does the intersection of these identities mean to you?

Cheryl: One of the ways I identify as a Jew is to value being curious and engaged in learning: to be gamirna (to be learned, and to be learning). As an ally for Jordyn (our adult child) and the greater queer community, I have learned, explored and gained insight–gamirna–into understanding sexuality, gender identity, gender expression, and queerness, so that I can bring others, who are less aware, into the conversation safely for all those involved.

Jordyn: As a Jewish person I’ve been encouraged to question: to question the status quo, to question the state of the world, to ask big questions about relationships and the human experience. This is also the core of my queerness; to be queer is to question, to be innovative, to do things because they are innate or authentic and not because you’ve been told to act or be a certain way by social standards.

Is there a queer Jewish figure (past or present) who inspires you? Why do you admire them?

Cheryl: Benay Lappe is a modern radical queer Rabbi and teacher who quite remarkably was Jordyn’s study group teacher for three years before their B’nai Mitzvah in 1999. Unfortunately, at the time neither Jordyn nor Benay could speak about their queerness fully. Jordyn didn’t have the language for it yet and Benay had to put herself into the closet to be able to be ordained at the Jewish Theological Seminary in 1997.

Jordyn: The liberties of our world today are forged by the sacrifices of our ancestors who fought to live their lives more freely. Benay talks about a future of Judaism, a constantly evolving Judaism, that is unrecognizable to us now. Benay shares that change (propelled by those willing to harness it and appreciate change’s innate queerness) is actually healthy. Benay forged a path for all queer Jews because her svara (a Talmudic term meaning “moral intuition”  which is explained in the Talmud to be the only guide/law that can even overturn Torah) taught her that a more liberated future version of the world was possible even as the walls of the current institutions of Judaism limited her ability to bring her whole full self to her daily studies. In 2003, with her newly minted rabbinate, Benay established the traditionally radical yeshiva, SVARA. From the SVARA website: “SVARA is a traditionally radical yeshiva dedicated to the serious study of Talmud through the lens of queer experiences. SVARA’s unique pedagogy makes Talmud study in the original accessible—for the first time in Jewish history—to all who want to learn.”

What is your most meaningful Jewish experience/memory?

Cheryl: Jordyn and Dani were married in a bittersweet moment three weeks before Dani’s mom, Marcia, passed away. With 36 people, in Dani’s childhood home, we marked this most beautiful day with many rituals; a canopy/chuppah made with tallit from those who had died, to an adapted version of the seven blessings, to poetry and psalms read by Marcia, to a Ketubah that reflected the union of this beautiful, queer couple.  Dancing (fulfilling the mitzvah to celebrate with Jordyn and Dani) even while we were heavy-hearted made me very aware of my Jewishness. I remember feeling like we were in our own little world, suspended in a moment between life, love, and death, and feeling that this must have been how our ancestors felt when they had to carefully and secretly find their own ways of celebrating their Jewishness during times of great fear and loss.

Jordyn: At my wedding, my mom worked to draft a Ketubah that explicitly used gender neutral language. The Ketubah calls me and my partner “child” of our respective parents rather than “daughter” or “son,” and on our signature lines reads “beloved” rather than “bride” or “groom.” Two things I want to highlight about this: first, it brings me great peace and gratitude that my mom (and family) had the drive to pursue a version of the Ketubah that would reflect my identity; second, it demonstrates to me the ways in which we are able to bridge traditional ritual with contemporary social life. I see Judaism as both communal (an experience among people with a shared identity) and as individually customizable (we have agency to each live the Jewish life that most aligns with our unique spirit).

Is it important/meaningful for Jewish people (regardless of gender identity, sexuality, etc) to acknowledge/celebrate Pride Month? How can allies in all spaces—including Jewish ones—support queer individuals, couples, and families?

Cheryl: As Jewish allies, it can be uncommon to feel like “the other” or “the outsider” in a place like New York City, where Jews thrive. Maybe the comfort of our Jewishness in NYC is what makes so many of us want to live here? Perhaps we can turn that understanding towards queer people and understand the desire queer people have to be in safe spaces where their lives/identities are not on the margins. I also think that as Jews we know how easy it can be for narratives of resentment and hate to build popular momentum and for misconceptions and stereotypes to be used when talking about Jews. The same is true for those that identify as queer, perhaps even more so today as more and more anti-LGBTQ bills are drafted and passed across the country (280 bills in 2022 already) attacking the liberties and lives of queer people. Today, in certain states, teachers cannot even validate and support a young student who is questioning their identity, young trans kids are being kicked off sports teams that align with their gender identities, and parents of trans kids can be charged with abuse and felonies for supporting their children in accessing gender-affirming care. My heart breaks for these parents and for these kids. For me, it is deeply personal and I can easily put myself in the shoes of my extended queer family and queer ally community. I do feel that we all know that it is our moral obligation, our svara, our “moral kishkas,” telling us to stand up and stand together with our queer community, as we are instructed by Talmud to treat everyone with human dignity.

Jordyn: There is an ancestral presence of persecution that we Jews know deeply. We are reminded each year as we sit for Passover seders of the history of our people. Many of us have family members who can conjure the lived experiences of pogroms, concentration camps, and other traumas inflicted on our ancestors during the Holocaust; all ills that were brought to Jews simply for being themselves. When we hear of antisemitic actions in the United States, it is easy for us to feel harmed and we are often quick to spend resources, energy, and time standing up for fellow Jews and enforcing protections. Somewhere in us, even if we’ve never directly experienced antisemitism, we know it’s right under the surface and know we need to pour love on top of the grumblings of hate. To be a trans person in this cis world is to feel that rumbling all the time. And just like Jewish people have had to rely on allyship and protection, trans and queer people need our fellow allies to step up with love. We are not the majority—like Jews, trans people make up less than 2% of the United States population. So, I implore you to tap into your moral intuition instead of your intellectual curiosity. All too frequently, discomfort with the unknown is fueling an effort to suppress and eradicate queer life—and most specifically trans people. It should not take much for us as Jews to recognize these efforts as violent and step up to protect the members of our communities that are most vulnerable. Listen to those with lived experience.

The Trevor Project - for mental health support and suicide prevention

Athlete Ally - to end homophobia and transphobia in sports

As a take away, you should lean into love. You should not only protect and fight for trans and queer people, but you should be impressed with the thriving lives that many queer and trans people (Jews and non-Jews) are living. Recognize that Central Synagogue has been blessed by multiple queer rabbis and cantors and that our community is richer for it. The color, creativity, and empathy of queer and trans people is special—appreciating the value and awesomeness of someone’s queer life, rather than questioning it, could lead us into an even more beautiful version of Judaism of the future.

Thank you, Jordyn and Cheryl! We look forward sharing more of our community’s stories and perspectives during Pride Month and throughout the year.

Please direct all press inquiries to Central’s Communications Department via email at .(JavaScript must be enabled to view this email address), or phone at (212) 838-5122 x2031.