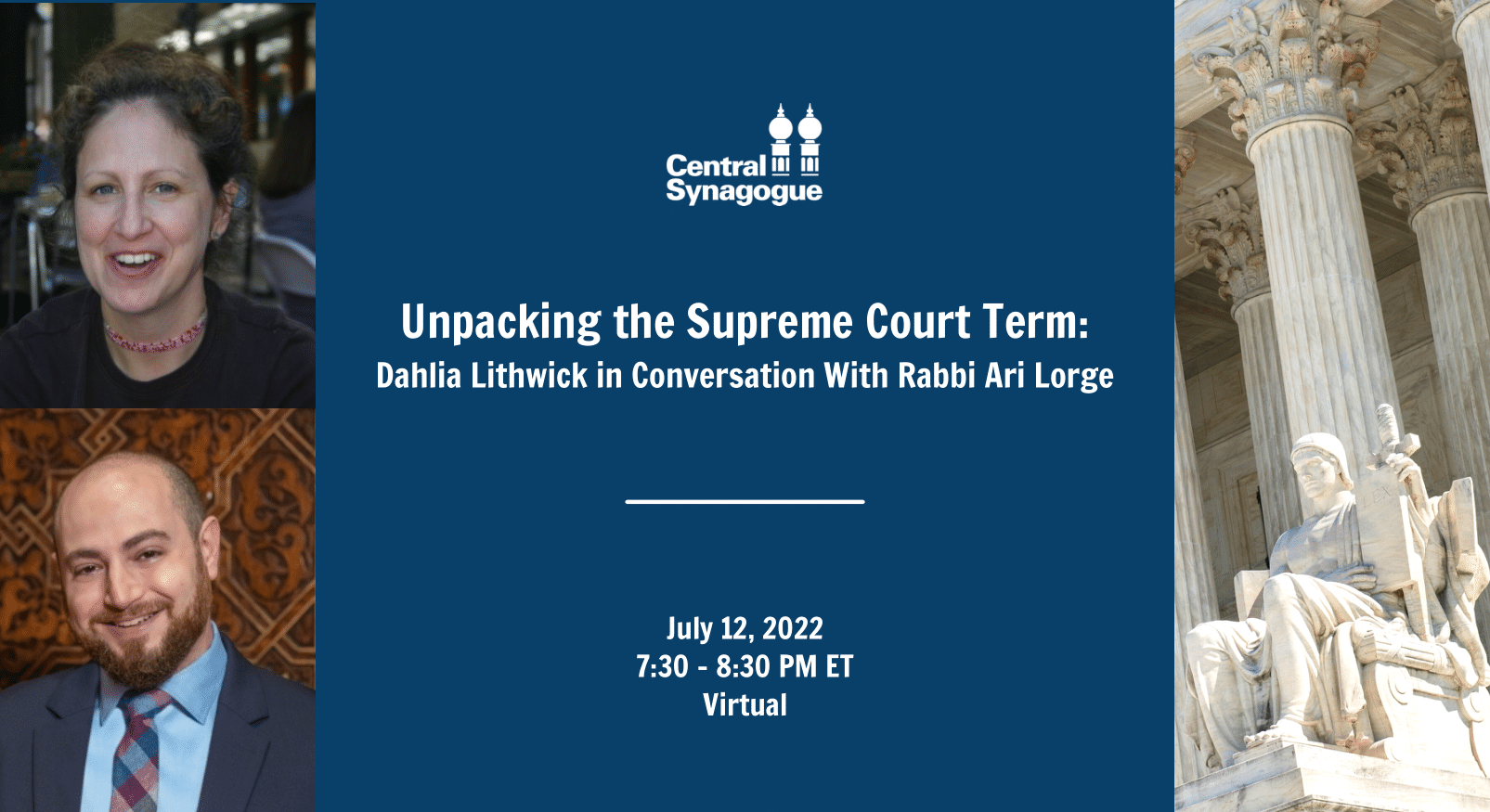 Throughout June, the Supreme Court will issue its decisions from a blockbuster term. The nation will hear opinions regarding abortion access, prayer in schools, the state funding religious institutions, rights of the indigent to effective counsel, and much more. Many of these topics have concerned the American Jewish community for centuries and will have ramifications for our community today and for years to come. To help us unpack the decisions, the dissents, and the intersections with the Jewish community, Dahlia Lithwick, senior editor at Slate, and host of the bi-weekly podcast, Amicus, will join Rabbi Ari Lorge in conversation.

Dahlia Lithwick is a senior editor at Slate, and in that capacity, has been writing their "Supreme Court Dispatches" and "Jurisprudence" columns since 1999. Her work has appeared in the New York Times, Harper’s, The New Yorker, The Washington Post, The New Republic, and Commentary, among other places. She is host of Amicus, Slate’s award-winning biweekly podcast about the law and the Supreme Court.

In 2018, Lithwick received the American Constitution Society’s Progressive Champion Award, and the Hillman Prize for Opinion and Analysis. Lithwick won a 2013 National Magazine Award for her columns on the Affordable Care Act. She has been twice awarded an Online Journalism Award for her legal commentary. She was inducted into the American Academy of Arts and Sciences in October, 2018. In 2021, she was a recipient of the Women’s Media Center’s Exceptional Journalism Awards. In 2021 she won a Gracie Award for Amicus Presents: The Class of RBG, which featured the last in-person audio interview with Ruth Bader Ginsburg.

Lithwick has held visiting faculty positions at the University of Georgia Law School, the University of Virginia School of Law, and the Hebrew University Law School in Jerusalem. She was the first online journalist invited to be on the Reporters Committee for the Freedom of the Press. She has testified before Congress about access to justice in the era of the Roberts Court and how #MeToo impacts federal judicial law clerks. She has appeared on CNN, ABC, The Colbert Report, the Daily Show and is a frequent guest on The Rachel Maddow Show.

Ms. Lithwick earned her BA in English from Yale University and her JD degree from Stanford University. Her new book, Lady Justice, is forthcoming from Penguin Press (September 2022). She is co-author of Me Versus Everybody (Workman Press, 2006) (with Brandt Goldstein) and of I Will Sing Life (Little, Brown 1992) (with Larry Berger). Her work has been featured in numerous anthologies including Jewish Jocks (2012), What My Mother Gave Me: Thirty-one Women on the Gifts That Mattered Most (2013), About What was Lost (2006); A Good Quarrel (2009); Going Rouge: Sarah Palin, An American Nightmare (2009); and Thirty Ways of Looking at Hillary (2008).

Learn more about Dahlia Lithwick via the Amicus Podcast (Slate).